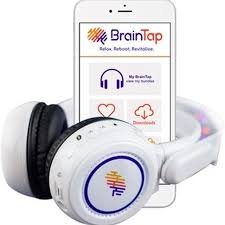 BrainTap’s neuro-algorithm produces brainwave training — the synchronization of brainwaves to a specialized sound — with no user effort. The result of which is full-spectrum brainwave activity. Using this matrix of neuro-activity, each of BrainTap’s sessions is encoded differently to ensure maximum neuroplasticity — the brain’s ability to reorganize itself by forming new neural connections, resulting in a flexible and resilient brain.

Braintapping creates a symphony of brainwave activity, a feeling of calm focus that’s just right for learning and productivity.

Your limbic system is being stabilized – Your body is calmed, your breathing becomes rhythmic, your hands warm and your muscles relax. The limbic system is involved in motivation, emotion, learning, and memory.

Your cerebral blood flow is being increased - CBF is associated with many forms of mental disorders, including anxiety, depression, attentional problems, behavior disorders and impaired cognitive function. CBF tends to lower as we age often causing cognitive decline. People experiencing depressed mood usually have lower levels of CBF in the left frontal and prefrontal lobes.